Delving into the crafting abyss while keeping it geeky. Attempting to challeng myself with new things everytime.
Leave a comment 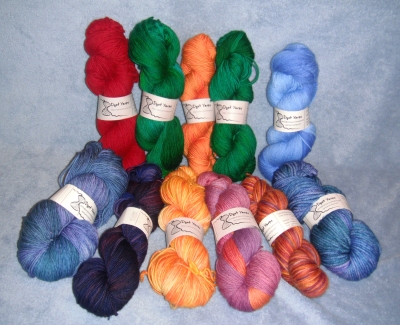 What can I say? I’ve become a yarn admirer/collector/snob/addict. I at least can say all this yarn was purchased from a friend who is also a starving law student. So it “really” is for a good cause, or at least I keep telling myself that. ^^;;

Well it’s worth the money I paid, plus at a discount with a free skein! (The red one.) All this yarn was dyed by my friend, Nuri, who has a shop on Esty called Dyet Yarns. There currently isn’t much on there, mainly because I keep buying everything, plus she’s also busy with school. Regardless, she does AMAZING colorwork, if you can’t already tell from all the different skeins on the image above. She will be putting more up there soon enough, so feel free to keep checking back and hopefully I won’t have already bought all the pretty shinies she puts up there. ^___~

As for the skeins, in a previous post, I mentioned I bought two of them from her to make socks out of. Eventually they will be used, but they are now part of my always growing stash. The rest of the skeins are ones she dyed, in which she gave me first dibs to purchase at a discount. It was SO hard to resist buying more, but I think I got a decent amount along with a good variety of colors. I did have her custom make me skein: 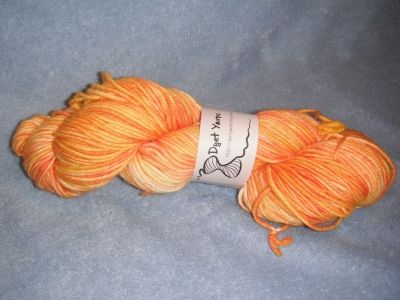 She calls this colowork: Helios, after the titan god of the Sun. I wanted yellows and oranges in particular for a hat that I’ve been wanting to make. It’s an Eskimimi pattern called Pamplemousse. It’s such an adorable hat, and I wanted to make sure I had similar color yarn to make it. I’m currently halfway done with it and look forward to finishing it. 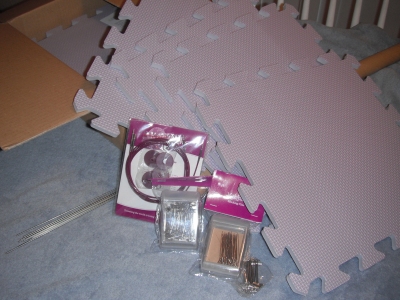 Yes. I bought even more knitting supplies from Knit Picks. I really NEEDED them. I promise, I do. Well, I will be needing them eventually, so I might as well stock up on them now. How can I possibly call myself a knitter without knitting blocking mats, blocking pins, blocking wires, or more cable needles? I do plan on lace knitting and it always looks better when blocked.

I actually do have a shawl project in my queue that I plan on making for my mother, however the Malabrigo yarn has yet to be delivered to my local knitting store. It’s ok, I have more than enough projects that I’m working on already.

As for other things, these next few weeks will be very busy on the blog. Now that PAX East is finished, I can post a few more projects that I’ve had completed for a while, but couldn’t/didn’t want to post so the surprise wouldn’t be spoiled. I also have other completed projects to post that I never found the time to share. (The real truth is that I was lazy, but this will be our secret.) I am also participating in the 2nd Annual Knitting and Crochet Blog Week that starts on March 27th. The topics are interesting and I plan on working on them this weekend.

So look forward to more blathering by me. Hopefully this will help me improve my blogging/writing skills as well as share more things about myself.

← Knitting and Crochet Blog Week 2011
Mittens To Match The Cowl →